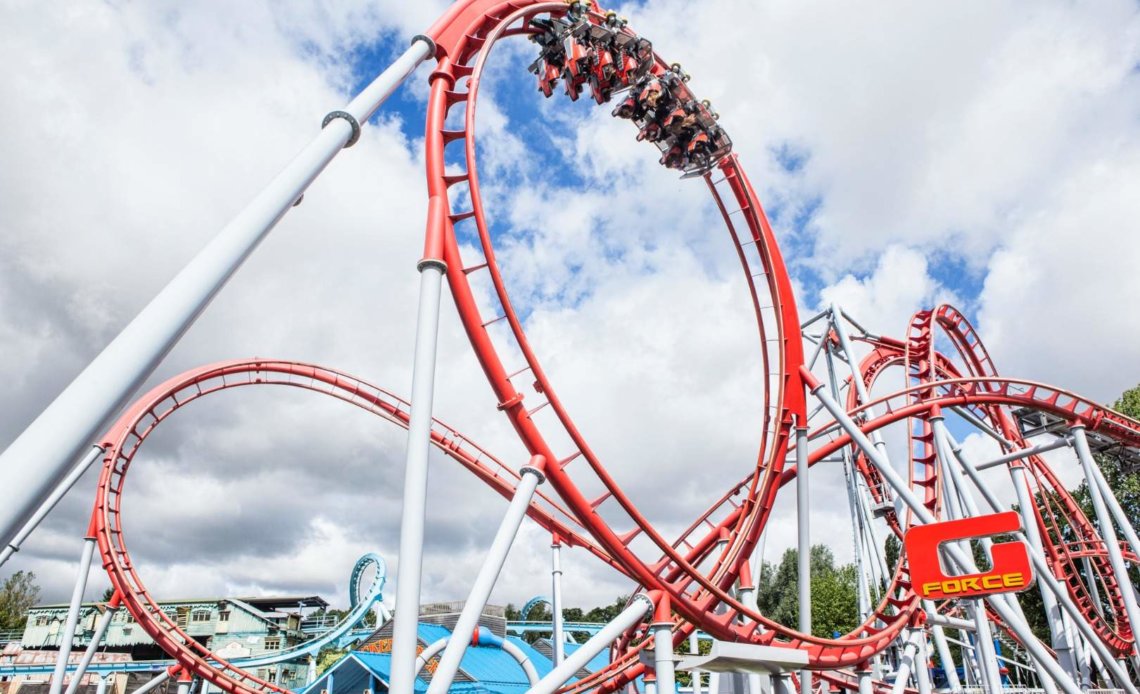 The best theme parks in England will be opening up soon! Let’s take a look at which ones have the best rides, rollercoasters and all round experience.

Each theme park in England offers its own unique attractions to draw you in, from live festivals to bizarre rides and colourful playgrounds for children. Of course, not all of England’s theme parks were created equal, or for everyone.

Whether you’re looking for the best tea cup ride for little kids, or the highest drop for teenagers – these are the best theme parks in England divided by type.

England theme parks are safe, and will be doing all kinds of COVID updates to make them as clean as possible for you to enjoy, and to make them good socially distanced days out. Theme parks are a chance to sit back (in your rollercoaster seat) and enjoy the day in a fun environment made for kids and adults alike!

Read through this list of the best theme parks in England to pick your next adventurous day trip.

We’ve divided up England’s best theme parks by type so you can find the best ones for your group / needs.

Best all round theme parks in England

We’re spoilt with England theme parks, but these are the absolute best ones for all the family to enjoy. With high rides, loads of entertainment options and specific sections for younger children, they’re great for everyone.

These are also the best England theme parks for adults.

Alton Towers is the largest theme park in England.

Many would say that Alton Towers is also the best theme park in England, and I’d have to agree. I grew up in Staffordshire, about half an hour away from Alton Towers and used to go at least twice a year. The best times were off season, when it was quiet, and you could just keep running round the queue lines and going on again and again.

Adrenaline junkies love Alton Towers, and anyone with an eye for design too. There are height restrictions for the rides here so they’re cleverly built into the landscape.

There are some iconic rides here – Nemesis and Oblivion – but also some newer updates, including Galactica which comes with a virtual reality headset. The first wooden rollercoaster to be built in the UK for 20 years is also here, The Wicker Man.

READ MORE in the area: Best Days Out in Staffordshire

Thorpe Park has earned its spot on the list of England’s best theme parks with some of the highest and fastest rides in Europe. Thorpe Resort Park is the best choice for thrill seekers in England!

Thorpe Park isn’t just a theme park but rather a full holiday destination with a themed hotel, amusement park, waterpark, and live shows. It’s specialised in rollercoasters and has 7 of them making Thorpe Park the most thrilling theme park in England, made official by winning ‘Best Theme Park for Thrills’ at the UK Theme Park Awards 2020.

Make sure to try Stealth England’s fastest rollercoaster during your visit to Thorpe Park – going from 0 to 130kph in 1.9 seconds. Yikes. Saw – The Ride, has a ‘beyond vertical’ 100 degree drop, while you’ll need to bring a change of clothes if you want to go on Tidal Wave. You’ve been warned!

READ MORE in the area: Best Days Out in Surrey

This family owned theme park has Europe’s only stand up coaster, The Shockwave. Head to this top theme park in England if you fancy giving that a go!

If you’ve got longer than a day, Drayton Manor also has Thomas and Friends-themed family hotel rooms too.

These family theme parks in the UK are best for younger families. Not saying older children won’t enjoy them, but they might lack that adrenaline rush they’re searching for. For the best England theme parks for children, read on…

Legoland Windsor is one of the most visited theme parks in the UK, attracting millions of people every year. The resort is split into 12 lands for you to wander around.

Legoland Windsor is both educational and entertaining, with loads of restaurants and shops too. The crown for best England theme park is a difficult one to give, and to claim, but I’m sure there are lots of kids out there who’d say Legoland Windsor for sure.

This is the best theme park for kids near London.

READ MORE in the area: Best Days Out in Berkshire

The UK’s ultimate family theme park, Chessington World of Adventures makes for a great day trip from London. As as one of England’s top theme parks, ‘Chessington’ as we like to call it is also a zoo (with over 1000 animals!) and a sea life centre (one of the best aquariums in England), with a Go Ape high ropes course too.

There are over 40 rides here in 10 different lands, all a bit tamer for the child-friendly audience here.

Chessington World of Adventures won GOLD for best theme park for families at the UK Theme Park Awards 2020. If you’re going to go to a theme park, you might as well go to the best, right?!

Located in the New Forest, Hampshire, Paulton’s Park has over 70 rides and attractions, all for kids. You might know it better as Peppa Pig World.

As well as Peppa Pig followers, anyone who loves dinosaurs will enjoy it here. Go into the immersive Lost Kingdom for four acres of Jurassic landscape, with two family rollercoaster rides, an adventure play park and a Jeep exhibition too.

READ MORE in the area: Best Days Out in Hampshire

Flamingo Land in Kirby Misperton, in North Yorkshire, describe themselves as having ‘Wild animals, wilder rides’. I feel it’s important to say here that by ‘wild’ they mean for kids. If your teen is looking for a day out with huge rides and adventure thrills, this might not be the UK theme park for you.

Flamingo Land is England’s only combined theme park, zoo and holiday resort in one, all set in over 375 acres of parkland. There’s a real focus on conservation here, which started with flamingos but now has another 129 creatures calling in residence.

READ MORE in the area: Best Days Out in North Yorkshire

These England amusement parks are all based on the coast of England, at our wonderful England seaside resorts. If you like a view when you’re riding high on that rollercoaster, these are the English theme parks for you.

Located in Kent Dreamland Margate may seem a little too far for some England day-trippers. However, it’s worth the travel! This England theme park was redesigned in 2015 and is now known for live music, festivals, and 26 spectacular rides.

Located opposite the golden sands of Margate Beach, Dreamland has enjoyed a revival among London day trippers, and Instagrammers – looking for that iconic shot in front of the big wheel. Visit Dreamland and you can expect vintage, family and thrill rides, pop-up entertainment, live music and art installations, alongside eclectic bars and street food.

READ MORE in the area: Best Days Out in Kent

There’s not quite an experience like Blackgang Chine amongst the England theme parks. You can meet gigantic moving dinosaurs, adventure in a princess castle, or fight for your life on board of a pirate ship. You need to go to Blackgang Chine with an open mind, don’t be expecting the heady heights of Alton Towers, but it’s a lovely day out with Grandparents and little kids all the same.

There’s also a great maze attraction here – one of the many wonderful mazes in England.

READ MORE in the area: Best Days Out on the Isle of Wight

Something for the whole family! Visit Blackpool Pleasure Beach and try their unique twin-track coaster, watch shows by world-class performers, discover Ripley’s Believe it or Not, or play Adventure golf.

There truly is something for everyone in Blackpool Pleasure Beach. It’s definitely one of England’s top amusement parks, and one of the most well known too. Over six million visitors come here anually to enjoy over 125 rides and attractions, and shows.

The ICON ride at Blackpool Pleasure Beach won BRONZE in the ‘Best Rollercoaster’ award category at the UK Theme Park Awards 2020, after two at Alton Towers. Pretty impressive for a coastal amusement park. It also won GOLD for Valhalla, in the ‘Best Water Ride’ category.

The Blackpool theme park’s specialty and pride is Nickelodeon Land where kids can play with their favorite characters from Nickelodeon TV shows. The adorable dogs from PAW Patrol, SpongeBob SquarePants, and other friendly life-sized characters wait for your family’s visit to the Blackpool Pleasure Beach.

READ MORE in the area: Best Days Out in Lancashire

England’s theme parks are home to spine-tingling vertical drops, countless loop-de-loops and powerful G forces – the theme parks in England are definitely up there when it comes to rollercoasters. As you can see from this list, there’s plenty of places to visit this summer for a thrill.

Theme parks in England can be pretty expensive, so make sure you book in advance on Tiqets to get the best deals and prices. There’s not really such a thing as a ‘cheap theme park in England’ to be honest. Check out our tips on making day trips cheaper if you want some advice.

Hope you’ve enjoyed this list of the best theme parks in England. Has your favourite English theme park made the list? If there are any more you think our readers would like, let us know about your top England amusement park below.

PIN THE BEST THEME PARKS IN ENGLAND FOR LATER

Looking for the best day trips from Exeter? If you’re in the city and want to know the best…
END_OF_DOCUMENT_TOKEN_TO_BE_REPLACED
Interest

Fancy a day out in Ryde? It’s one of the easiest places to get to on the Isle of Wight, and…
END_OF_DOCUMENT_TOKEN_TO_BE_REPLACED
InterestQuiz

Here’s an easy pub quiz with a picture round, for all the family to enjoy. Big clue: all the…
END_OF_DOCUMENT_TOKEN_TO_BE_REPLACED