13 Awesome Days Out in Cheshire 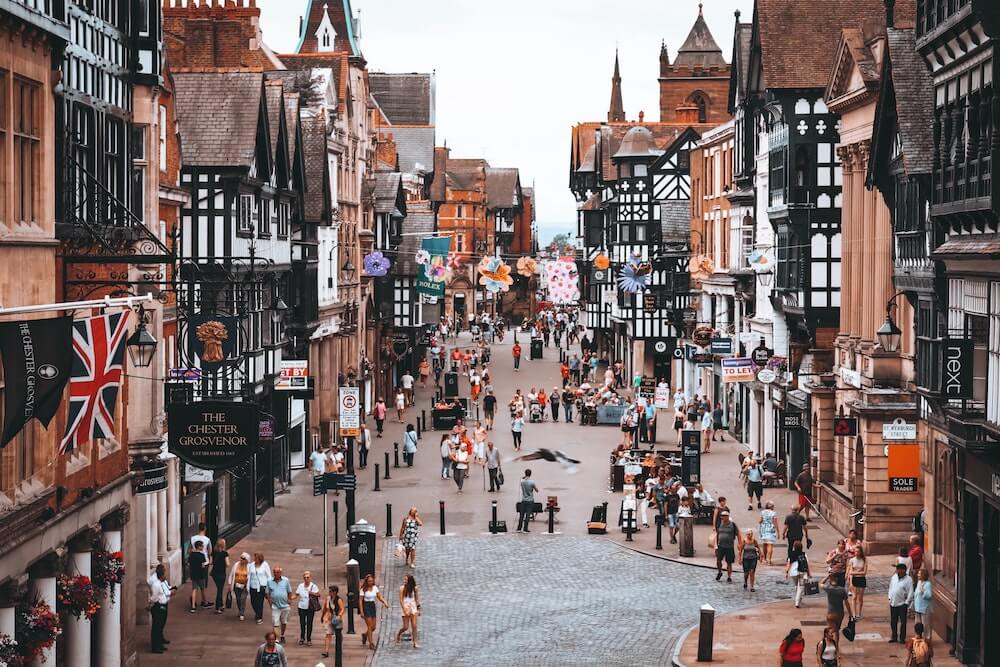 A day out in Cheshire is always a great idea. But if you’re not quite sure what you can do in a day in Cheshire, here’s your guide to the north western county.

I’ll warn you though, you might have a job choosing because there’s loads of fun day trips in Cheshire to choose from. Cheshire has a cool Roman history, and it’s main city, Cheshire, is an absolute beaut.

If you’re looking for an outdoorsy, adventure day out with your pals there’s Delamere Forest. Alternatively, if you’re opting for a family day out in Cheshire, Chester Zoo and the Lion Salt Works are great options.

Anyway, let’s crack on. Here are just a few ideas to keep yourself busy on a day out in Cheshire.

Best days out in Cheshire

1. Meet The Gruffalo in Delamere Forest

If you fancy a cheap day out in Cheshire, I’d head to Delamere Forest. Right on the edge of the quiet village of Delamere, in between Chester and Northwich, it’s the largest woodland area in the UK.

Covering over 970 hectares, there are a fair few trees, trails and woodland creatures you can find, the most surprising of which is The Gruffalo. Remember the famous children’s book?

Well The Gruffalo character is so loved in the area, it has its own statue in the forest and Forestry England even runs a Gruffalo Orienteering challenge where kids have to search for 12 hidden Gruffalo markers.

From Gruffalos to gorillas, Delamere Forest is also home to the Go Ape Forest Segway and the Go Ape Tree Top Adventure. Between £20 and £35, depending on the type of activity you go for, you can be exploring the forest from above doing the high ropes course or zipping between trees on a segway.

2. Get salty at the Lion Salt Works

When I say that the Lion Salt Works is one of the last open-pan salt work sites in the world, that may not really sound that exciting. You might even be eye rolling me right now.

Located in Marston, not too far from Northwich, the Lion Salt Works is an interactive museum that shows you the old methods of salt extraction. It used to be a big part of life in this part of Cheshire and so it had a big impact on the people and the economy – something the museum tells you a bit more about.

There’s a walk-in subsiding house, an educational film and some demonstrations to show the huge amounts of steam that used to come from the big salt-boiling pans.

Admission is just £6.60 and that also gets you into a butterfly garden which is a nice little bonus.

Chester Zoo is one of the good ones. It really puts animal welfare first and has a whole initiative focussed on stopping the extinction of more animals. It’s even won awards like the ethical, responsible and sustainable tourism award last year.

On top of that, it’s one of the oldest zoos in the UK, opening way back in 1934. All these years later, it’s still super popular with over 35,000 animals to check out – the orangutans, lemurs and lions seem to be the favourites – and 128 acres of zoological gardens.

Chester Zoo is definitely one of the most popular days out in Cheshire for kids.

Located just outside of Chester (no shock there), tickets cost between £20 and £25 depending on the day you’re going and you can get a decent lunch in the memory cafe.

The Best Zoos for a Day Out in England

4. Feel rather posh at Tatton Park

One of Cheshire’s top days out, the name for this one even sounds posh, right? “Tatton Park”.

The parkland, gardens, mansion and farm all form a medieval landmark that used to be owned by the prestigious Egerton family. They called the Knutsford Estate home back in the Tudor period right through to 1958 when it became a National Trust site. Now, rather than just the one family, over 800,000 people enjoy Tatton Park each year as one of the most impressive stately homes in England..

First to see is the mansion itself and the fancy art and fine furnishings inside. Then there’s the 50 acres of gardens, which include a walled kitchen garden, Japanese garden, glasshouses and a maze. Probably one of the most varied days out in Cheshire!

Next up is the farm with its mill, cottage and cooking demonstration. Then, if you haven’t run out of time, or passed out from exhaustion, there’s the deer park, the medieval Old Hall and stable yard with shops and a restaurant.

Only setting you back £13, you can spend an entire day out at Tatton Hall without it costing too much. This makes for a great day out in Cheshire for adults.

5. Enjoy the history in Chester

You can’t go to Cheshire and not spend a day in Chester. Home to Hollyoaks, you could totally be forgiven for thinking it’s nothing more than a college, bar and high street littered with a few dodgy characters. But, in reality, Chester is a historic town that started off as a Roman fortress before enduring attacks by the Vikings and an invasion by the Normans.

Check out the half hour Chester city cruise if you want some more information on the city.

“Set sail on the River Dee to see a different side of the city of Chester. These half-hour city cruises leave The Groves up to every 30 minutes, taking in marvellous views of city and countryside from the water.“

You can see some of the favourite historical spots by stopping by the Roman amphitheatre, walking the two-mile long city wall and taking in Eastgate and the Eastgate clock. Even if you just fancy coming here for the shopping, you can’t quite escape the city’s history.

The Rows are one of the most popular shopping spots in town and even have you feeling like you’re stepping back in time. A row of shops above ground level, they’re set in a kind of gallery style that’s made of timber and painted in black and white. Parts of the structure date back to the 13th century.

If you’re into your shopping, this is one of the best days out in Cheshire there is.

Oh, and there’s a great Chester hop on hop off city tour you can do if you want to explore the city with someone else leading the way.

More things to do on a day out in Cheshire

6. Explore the town of Congleton.

8. Visit The Silk Museum in Macclesfield.

9. Drive up to Stormy Point for views of the Pennines and Peak District.

10. Spend the day at the races at The Roodee, the country’s oldest racecourse.

The best day trips FROM Chester

Where’s your next day out in England?

13 Days Out on the Isle of Wight

How to Have a Great Day Out in the Cotswolds

8 Best Days Out in Suffolk for Everyone

Here are the best days out in Suffolk, for you to make the most of your trip. Whether you’re…
END_OF_DOCUMENT_TOKEN_TO_BE_REPLACED
Counties

12 Best Days Out in Warwickshire

Days out in Warwickshire are a glorious treat, and totally underrated. If you’re not quite sure…
END_OF_DOCUMENT_TOKEN_TO_BE_REPLACED
Counties

13 Best Days Out In Wiltshire

Days out in Wiltshire are totally underrated –have you been? If you’re not quite sure what…
END_OF_DOCUMENT_TOKEN_TO_BE_REPLACED