Discover 5 Most Awesome Days Out In Dorset 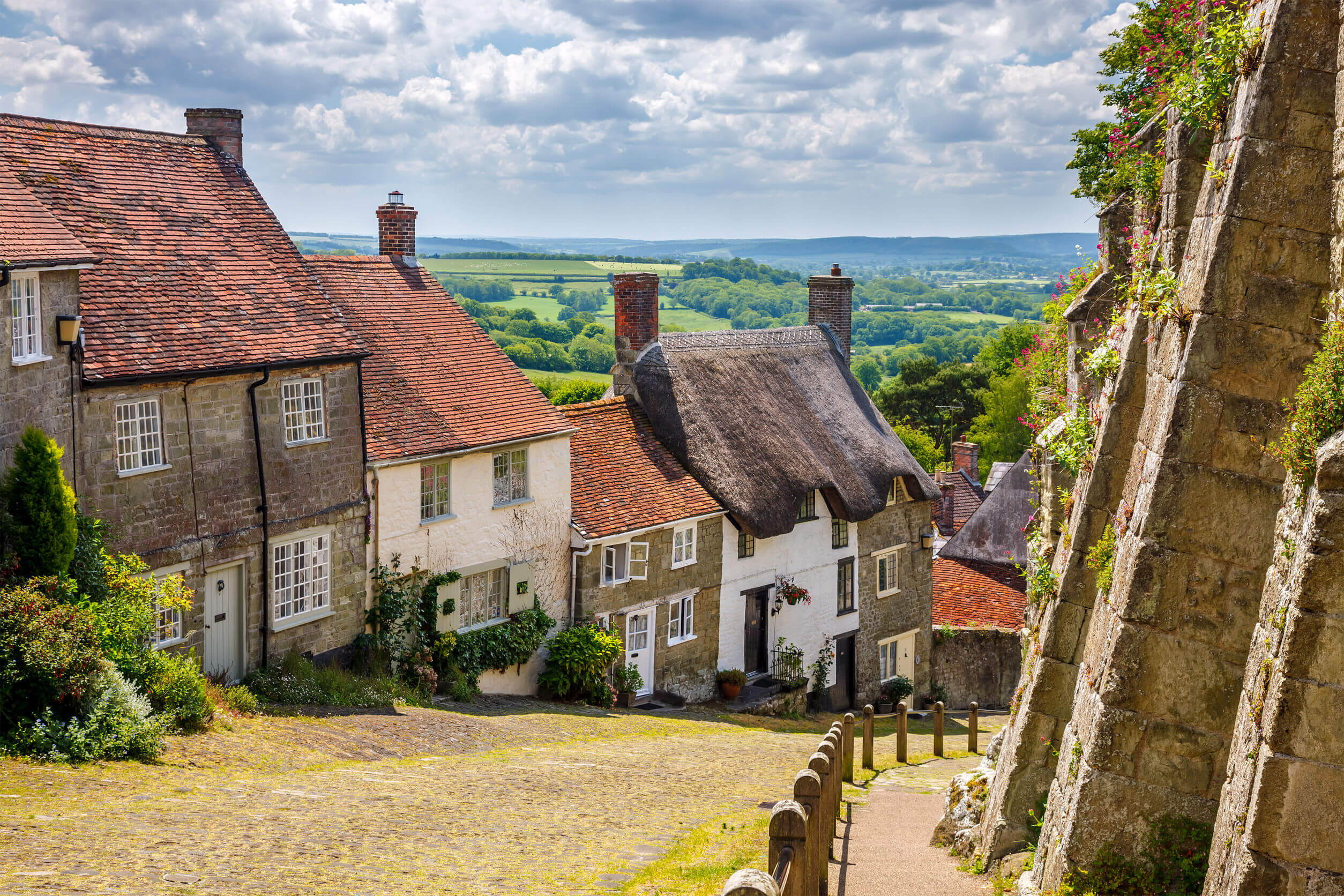 Only have time for one day out on in Dorset? Make the most of your Dorset day out with these ideas for Dorset day trippers!

Dorset is one of the most popular counties in England for a day out. Thanks to its beaches and pretty harbours, us Brits love it.

From Weymouth to Durdle Door, the coastline here is just spectacular. The pace of life is more relaxed, the fish and chips are in another league and there are so many beautiful picturesque spots for a photo or two. People who visit Dorset for the day want fudge, beaches and fresh air – and it’s all here in abundance.

Here are just five of the interesting days out in Dorset you could consider.

Best days out in Dorset

Shaftesbury is a Dorset working town with a history stretching back to Saxon times. The town is home to the picturesque Gold Hill, that was made famous in an advertisement for ‘Hovis’ bread. It has spectacular views down over Blackmore Vale.

Shaftesbury has long been a market centre, due to its location on ancient trade routes and still is a market town today. There’s a charter market on Thursdays and regular farmer’s markets, flea markets and book fairs, as well as monthly markets on a Sunday.

Other attractions in the town include Shaftesbury Abbey, and Park walk – a lovely stroll with far-reaching views.

From Shaftesbury, take the A350 southwards for a short distance to Melbury Vine Vineyard, a vineyard and sustainable winery, where you can find out more about the growing world of British wines. With our changing climate, English wines are gaining more of a parity with those of their European neighbours to the south. Melbury Vine Vineyard is a great day out in Dorset for anyone who wants to know more about English wines.

Best Vineyards in Dorset on the Dorset Travel Guide

2. Visit castles & coast on the Isle of Purbeck

Consider taking the steam train to Corfe Castle. Explore the famous castle ruins and the historic village down below. Set out from there to explore the Isle of Purbeck, where there’s plenty to see and do. Cycle to make the most of this beautiful area in a more sustainable way, or, take the Breezer Bus.

Around 8 miles away, Lulworth Castle is an early 17th-century structure looks like something from a fairytale. It’s a ‘mock’ castle that was built to entertain royalty and was originally a grand hunting lodge. It was devastated by a fire in the 1920s but has since been lovingly restored. For centuries this was the family seat of the Weld family, who are the current owners of the Castle and Estate.

Climb up the tower for spectacular views of the Purbeck countryside towards the Jurassic Coast and be sure to visit the 18th century Roman chapel and the 15th century church of St Andrew. After a stroll in the scenic grounds, you may wish to enjoy a tea and a homemade cake at the Tearoom.

Next, make your way down to the coast at Lulworth Cove.  Formed by the actions of the forceful waters swollen by melting ice at the end of the last Ice Age, Lulworth Cove is a breathtakingly beautiful part of the south coast. It has unique geology and beautiful, blue waters.

This is your chance to get up close and truly appreciate the Jurassic UNESCO World Heritage Coast. In this rounded cove you will find a lovely white pebble beach, which is extremely popular with holidaymakers in the summer months. This place has often been described as one of the natural wonders of South West England.

Hike along the Jurassic Coast from here on a round trip of around three miles to reach Durdle Door. Also a part of the Lulworth Estate, this is an iconic natural beauty spot and one of the best known natural attractions of this portion of the English coastline. Beside the famous rock formation you will find a lovely, sandy beach.

The name ‘Durdle Door’ is derived from the old English word ‘thirl’ which means to drill or bore. It does look as though this arch has been made by man but in fact this natural archway has been created entirely through the agency of the wind and the water.

3. Learn the history of Dorchester

In many ways, Dorchester is Thomas Hardy’s town. A large statue of the author is to be found here and the characters of Casterbridge, his fictionalisation of the town, haunt the streets. The origins of the real Dorchester go back much further.

Durnovaria was founded by the Romans in 70 AD.  Dorchester’s at times dark history includes the period during which it was the site of the ‘Bloody Assizes’ after the Monmouth Rebellion and later, this was the site of the trial of the Tolpuddle Martyrs. There are 293 structures in the parish that are listed by Historic England as notable for their history or architecture.

The National Trust’s Max House was the home of Dorchester’s famous literary son. This atmospheric Victorian house was home to the famous author Thomas Hardy. It was designed and built by the writer according to his own designs (he was a trained architect as well as an accomplished writer). He lived there from its construction in 1885 to his death in 1928. It was here that he wrote some of his most famous works.

Like the house, the garden was also Hardy’s creation. The plot of land was almost bare when he moved here and so Hardy planted a shelter belt of trees and gradually created a beautiful garden to grow vegetables and flowers. He also kept chickens here and ex-battery hens currently find a home here. Come here to get some tips for your own eco-friendly and sustainable garden.

Check out Prince Charles’ sustainable community – Poundbury. This sustainable development area on the outskirts of Dorchester is a fascinating place to explore.

Start your day with a sustainable, locally-sourced breakfast at the Hive Beach Cafe, enjoying wonderful views over Lyme Bay and Chesil Beach (we love Chesil Beach, it’s on our list of undiscovered England). Then consider taking the 9.5 mile hike along this breathtaking stretch of Dorset coastline to reach Golden Cap, and then Charmouth Beach.

You will see some of the beauty of the Dorset Area of Outstanding Natural Beauty.

Golden Cap is, perhaps, the highlight of this hike. It is a hill with a sharp cliff that descends into the English Channel on this stretch of the Dorset Coast. The top of these cliffs are the highest point on the whole of the south coast of England. As you’d expect from this high point, the views to reward the climb are spectacular.

Golden Cap gets its distinctive colour from a green mineral in the rock that turns a rusty-gold in the sunlight. The cliff line has retreated here over thousands of years and on a still, clear day, boulder arcs can be seen stretching out under the water – the remnants of old landslides.

Continue on from here to make your way into Lyme Regis. Lyme Regis is nicknamed ‘The Pearl of Dorset’ and is the county’s most westerly town, almost on the border with Devon. This is a picturesque and photogenic place, from the colourful cottages to the elegant seafront villas, to the Cobb, the curving harbour wall built in the 13th Century.

Lyme Regis is famous for its geology, fossils and paleontology and played an important role in the formation of the earth sciences. There are also plenty of places here to fortify yourself after your coastal adventure.

For example, check out the organic offerings at The Millside – a little local cafe and restaurant that is not to be missed.

The BBC television program ‘Springwatch‘ has been filmed on the estate and showed the diverse wildlife to be found there. Take some time to enjoy the grounds, and admire the workings of the sustainable home farm.

You can also walk to the Abbey, less than a mile away. Sherborne Abbey, now a parish church, was a Benedictine abbey between 998 and 1539 and before that, a Saxon cathedral from 705 – 1075.

Visit Sherborne Town on a Thursday or Sunday and you can also shop for second-hand gems and bargains at the Cheap Street Flea Market. There are plenty of places here to shop, eat and drink. Consider dining at the award-winning Seasons Restaurant, with its delightful local, seasonal produce and beautiful garden and terrace.

Days out in Dorset

These are just five suggestions for days out in Dorset, of course, there are many more. Take more time to explore this beautiful area and you’ll find plenty of natural beauty spots, historic delights, and hidden gems. Go on a road trip along the Jurassic coast to enjoy one of the most iconic landmarks in all of England.

Quicklist: best days out in Dorset

11 Best Days Out in Northumberland for all the Family

15 Wonderful Days Out in Herefordshire You NEED to Try

Looking for the greatest days out in Herefordshire? Maximise your Herefordshire days out with this…
END_OF_DOCUMENT_TOKEN_TO_BE_REPLACED
Counties

11 Unique Days Out in Cumbria for all the Family

Looking for the greatest days out in Cumbria? Maximise your Cumbria days out with this guide to the…
END_OF_DOCUMENT_TOKEN_TO_BE_REPLACED