5 Most Haunted Places in the New Forest, Hampshire

It makes sense that an almost thousand-year-old forest would have a few ghost stories. Here are a few tales of the most haunted places in the New Forest, courtesy of a local…

Here’s a list of some of the most haunted places you can visit in the area, which will also give good tourist value as a nice day out. 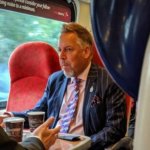 Tree surgeon, know-it-all, and forestry worker of many years standing, with a love for real ale, loud suits, and spooky stories!

Bolton’s Bench on the edge of Lyndhurst is a famous local landmark, a small hill that is said to have grown from the corpse of a dragon (the Bisterne Dragon) who was killed in the 1400s by a knight called Sir Maurice de Berkley. After Sir Maurice killed the dragon (his dogs attacked the monster and were able to loosen a scale and leave a chink in his natural armour, which Sir Maurice could then shoot an arrow into) he stopped sleeping and eating, and 30 days later had crawled back up the hill to die, where his body and those of his two dogs (Grim and Holdfast) turned to the yew trees which are still growing there.

It is said that before he died de Berkley was able to take the dragon’s hoard of treasure, and with it his family rebuilt Bisterne Manor House, which has a depiction of the dragon and statues of his dogs.

Sir Maurice’s ghost can often be seen on top of the hill, and many people from down below see him with his dogs from a distance, only to watch them disappear as they climb up towards them. Some have sat at the bench at the top of the hill and had him sit next to them, or stand directly behind them amongst the trees. Many have heard his ghostly dogs barking, or seen them patrolling the vicinity and the nearby gardens, and as far as nearby Pondhead Enclosure and the grounds of the Limewood Hotel. It is said they are there guarding the corpse of the dragon, and that if they are ever exorcised it will rise again, to ravage the New Forest once more.

The most famous of all the English fairies, thanks to a certain Mr William Shakespeare, is Puck, or Robin Goodfellow. The New Forest is filled with fairy stories, or ‘pixies’ as they’re called locally. New Forest Pixies are not like the stereotypical Victorian fairy, and instead of being cute little flower sprites seem to appear either as ragged, pale ponies or as odd little old men with big round ears and white skin, either naked or in mainly green clothes. They don’t have wings and can be many sizes, from an action man to a baby, and from child-sized to just a short adult.

A lot of places are named after Puck and the Pixies, and one story tells of tourists who were feeding ponies getting led by Puck into a bog, when he was in the form of a colt. They supposedly drowned, and their ghosts still haunt the place to warn travellers.

Another story tells of Gran Colin and Tiddy Cole, a giant pixie much bigger than a man, and a tiny pixie the size of someone’s hand, who used to throw sticks back and forth to each other across the forest, occasionally hitting people who got in the way!

Puck Pits Enclosure is a beautiful patch of woodland near Emery Down, and is filled with sightings of Puck and these strange New Forest Pixies.

In 1583 William Dodington finished building Breamore House, from the remains of the Catholic Breamore Priory, destroyed in the reformation. None before him had dared to build on the sacred lands, and with good reason.

He found himself tormented by ghostly monks, which eventually drove him to suicide.

Ever since then his widowed wife dressed in black for mourning, and had a portrait of herself painted in mourning dress. When she died she vowed that anyone who moved her painting would be meet a terrible end. Today she haunts the blue room of the house.

It’s said that her grandson became obsessed with her portrait, and his older brother found him holding it, snatching it away, horrified. Soon after the brother died, and still the obsession continued.

One night his mother found him drunk in the middle of the night, dancing naked with the portrait hugged to his chest. Screaming, she tried to pull the portrait from his hands, but no sooner had she touched the canvas than he stabbed her to death with his sword. His father, the son of William Dodington, found them next morning.

Their ghosts have all been seen, dancing in the night.

The cursed portrait hangs there to this day. Only two have touched it since those days. One of them was suicidal, and the other fell and broke both of his legs. The house is beautiful though, and if you visit go and see the mysterious Breamore Miz-Maze too!

The Best Beaches in the New Forest

On the wall of Boldre’s Anglo-saxon church is faintly carved the rough depiction of an antlered lion. In the late 1300s or early 1400s a local aristocrat and verderer by the name of John de Stratford, a nephew of the powerful Bishop of Winchester, found a giant pair of antlers sticking from the ground in a patch of woodland named Haresmede, in his lands around South Baddesley. He pulled the antlers from the ground, and found them attached to the head of a monstrous, raging red lion. Though the lion dragged him around the bounds of the forest three times, John de Stratford eventually succeeded in wrestling the powerful beast into submission.

Since that day it is said that the Stratford Lyon has appeared on the birth and death of every relative of de Stratford, and whenever the family has met with triumph or disaster. Since then the Lion has been spotted all over the forest, but especially in the lands around South Baddesley, Brockenhurst, and Boldre.

The Red Lion Pub in the middle of this area was named after the Lion (and used to be informally called ‘the Stratford’), and many sightings of the Lion come from people working or staying at the pub. Often found watching either from the distance, or right up against the windows, there are even reports from the 80s of people leaving the pub at night getting charged at by the monster, leaping out of the way at the last minute as it trampled past!

In 1990 a man was even gored by the beast and rushed to hospital. He recovered from his wounds, but nobody believed his story, and he had nightmares of the monster for years afterwards. If you can brave such danger, this historical New Forest pub is well worth a visit.

Beaulieu is just filled with ghosts, and the ruins of Beaulieu Abbey are riddled with them!

Countless ghostly monks have been seen over the years, sometimes chanting, sometimes in procession, and a local vicar even used to chat with them regularly, and knew each of them by name. As well as the sound of their Gregorian chants, many people (including the late Lord Montagu, who still owns the estate, and other members of his family) smell incense in their presence.

There are a number of ghosts in the adjoining Palace House, too, which was built from the ruins of the Abbey Gatehouse by the Earl of Southampton, a descendant of the Lords Montagu. The most often sighted is the mysterious ‘Blue Lady’, said to be the ghost of Isabella, Countess of Beaulieu. She was even photographed in 2013!

Beaulieu has a long history of witches, and it is said the grey ghost of the witch Mary Dore can be seen, sometimes in the form of a rabbit, while the spectre of a magical old Charwoman from Palace House (known as ‘Witchy White’) is usually seen in the form of a ghostly pheasant.

A ghost can often be found standing in the doorway of the nearby St Leonards Church, and the ghostly sounds of shipbuilding can be heard regularly in nearby Buckler’s Hard, also part of the Beaulieu Estate.

If you’ve been tasked with organising your mate’s stag party, fear not –these 15 ideas…
END_OF_DOCUMENT_TOKEN_TO_BE_REPLACED
AreasInterest

Looking for something a bit off-the-wall? There’s no shortage of weird events in England for…
END_OF_DOCUMENT_TOKEN_TO_BE_REPLACED